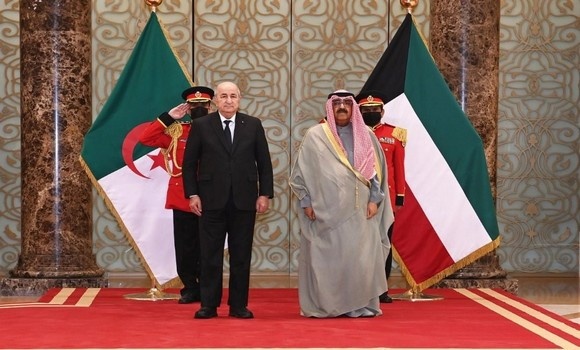 President of the Republic Abdelmadjid Tebboune’s official visit to the State of Kuwait, from Tuesday, is an opportunity to further strengthen the strong historical relations and step up bilateral cooperation.

The visit is meant to “enhance the bilateral ties and boost the deep relations of fraternity between the two brotherly peoples,” the presidency of the Republic said in a statement.

President Tebboune had sent, on 31 January 2022, a message to His Highness, Sheikh Nawaf Al-Ahmad Al-Jaber Al-Sabah, the Emir of the State of Kuwait, delivered by the minister of Foreign Affairs and National Community Abroad, Ramtane Lamamra, during a visit to Kuwait.

“Both countries show a real political will to achieve stability in the region.”

President Tebboune had received, late September 2021, a written message from the Emir of the State of Kuwait, delivered to him by the Kuwaiti Foreign Minister, Sheikh Ahmed Nasser Al-Mohammed Al-Sabah, during a visit to Algeria.

During the visit, the ministries of Foreign Affairs of the two countries had stated that Algeria and Kuwait shared the same positions over the main international and regional issues of common interest, especially their ties with the Arab world and the joint action to ensure the conditions for the success of the next Arab summit, due to be held in Algeria, and boost Arab-African cooperation.