President Tebboune meets with representatives of national community in Egypt 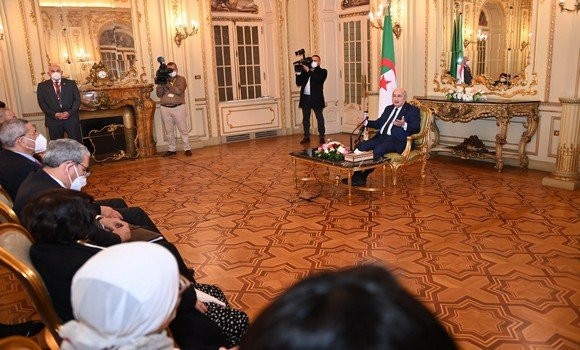 President of the Republic, Abdelmadjid Tebboune met Monday at the headquarters of his residency in Al-Qubba Palace in Cairo with representatives of the national community in Egypt under his working and fraternal visit to this country.

President Tebboune is accompanied by a ministerial delegation made up of Minister of Foreign Affairs and National Community Abroad, Ramtane Lamamra, Minister of Higher Education and Scientific Research, Abdelbaki Benziane, Minister Delegate to the Prime Minister in charge of Knowledge Economy and Startups, Yacine El-Mahdi Oualid and Minister of Culture and Arts, Wafaa Chaalal.

The visit of President Tebboune to Egypt, a brotherly country, comes after the visit made by Minister of Foreign Affairs and National Community Abroad, Ramtane Lamamra, as personal envoy of the President of the Republic, about a week ago.

Previously, Lieutenant General Said Chanegriha, Chief of Staff of the People’s National Army (ANP), had also visited Egypt as representative of the President of the Republic, Commander-in-Chief of the Armed Forces, Minister of National Defense, to attend the 2nd Egypt Defense Expo “EDEX-2021”.