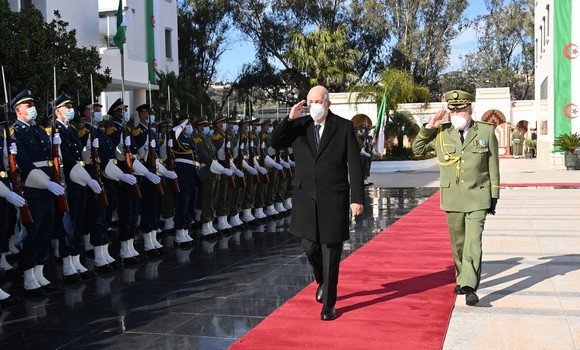 The President of the Republic, Supreme Chief of the Armed Forces, Minister of National Defense, Abdelmadjid Tebboune, on Tuesday declared August 4 the National Day of the People’s National Army.

In a speech broadcast by videoconference at the headquarters of the Ministry of National Defense and to all the commands of the forces, military regions, large units and colleges, the President of the Republic announced his decision to declare August 4 National Day of People’s National Army.

The head of state, who assured that some parties are disturbed by the sovereignty of Algeria, said “we will continue, with the support of our People’s National Army and an unwavering will, our way towards the rightful place of Algeria regionally and internationally.

President Tebboune praised Lieutenant General Said Chanegriha, Chief of Staff of the People’s National Army, for the achievements the Army has made and the efforts aimed at preserving the Army’s readiness in all circumstances.

He also welcomed the efforts of officers, non-commissioned officers, soldiers and all personnel “proud to belong to our brave Army.”

“I highly commend the national commitment and increased professionalism shown by our Army, especially during the exercises that demonstrate the level it has achieved.”

President Tebboune seized this opportunity to recall that the Algerian Army “is a peaceful army but ardently defends Algeria. Beware of anyone who dares to attack it.”